Since the early 1990s, Jones Family Farms has been giving a pewter tree ornaments to guests who harvest their own tree at the farm. They have also been available for purchase in our gift shop for guests who do not cut their own. Made at Woodbury Pewter, here in Connecticut, these ornaments are very special to the Jones family, and our guests - a special holiday tradition. Every year, a lot of thought and design go into the theme and look of each ornament. How complete is your collection? 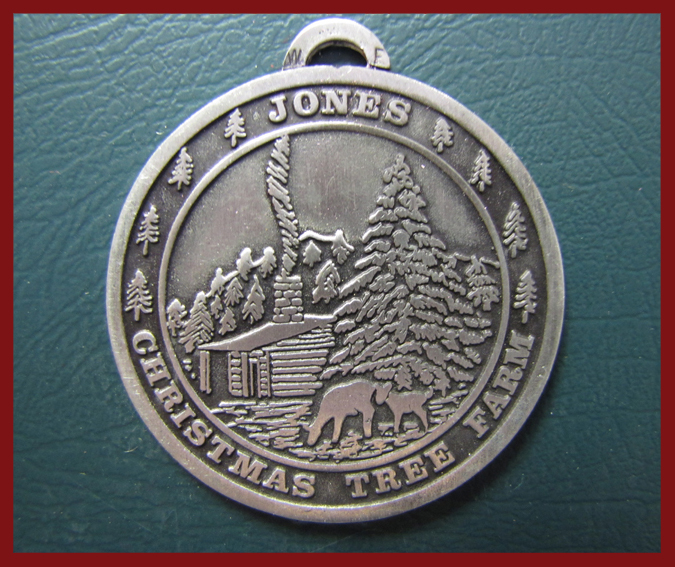 One of the first logos that Philip Jones used to have on his letterhead for the tree farm. 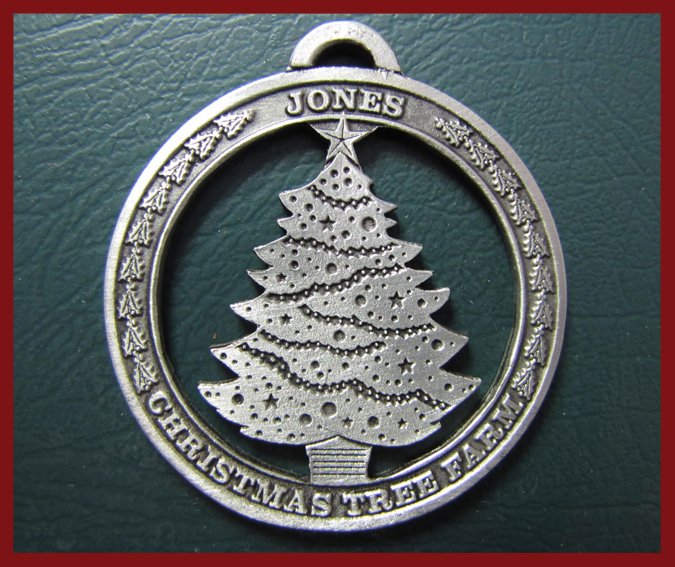 An early ornament we gave to guests as they harvested their tree. Notice the farm name was still Jones Christmas Tree Farm. 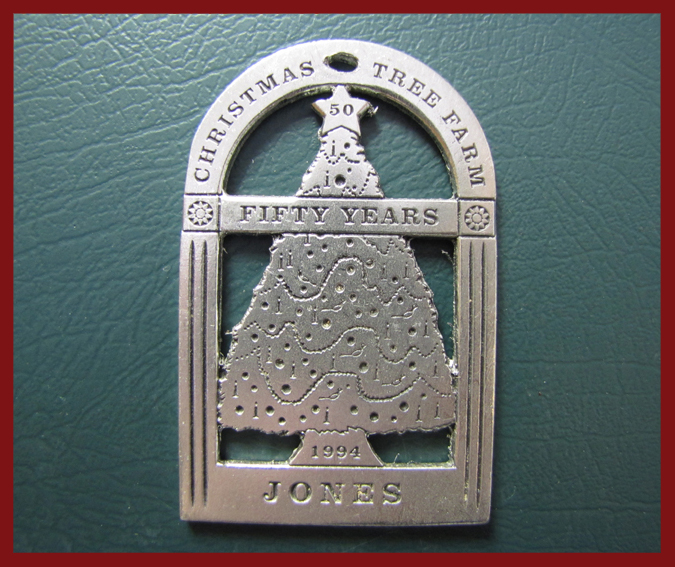 A large tree in a window for celebrating 50 years of Harvest-Your-Own trees at Jones farms. The first ornament with the year printed on it. 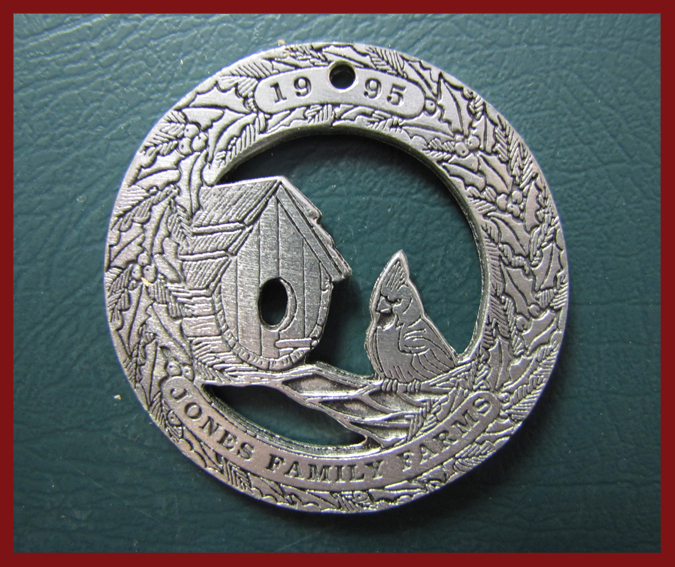 A friendly cardinal on a branch. The first ornament with the name Jones Family Farms. 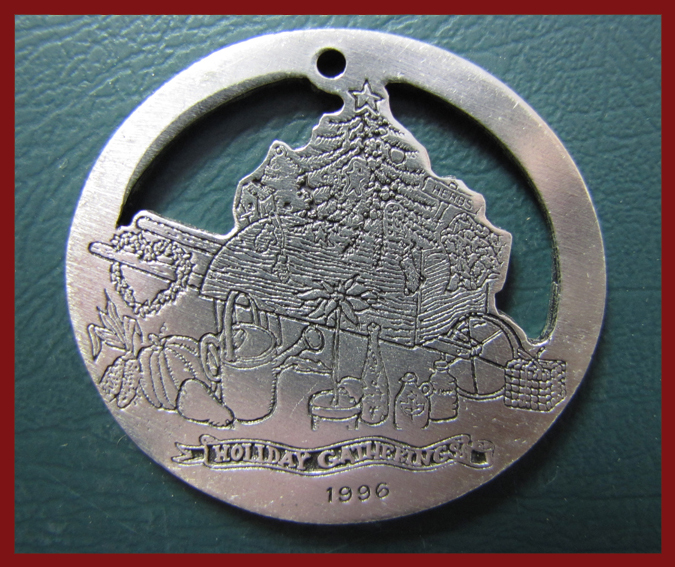 A wheelbarrow full of bountiful harvest. It honored the first few bounties from the Jones' Pumpkinseed Hill. 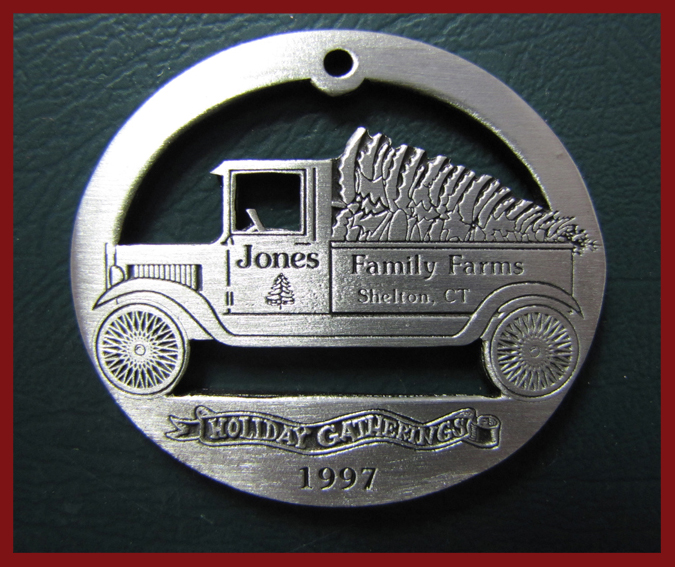 We had a truck, very much like this one, in the yard for photo ops that Christmas season. Mention of Holiday Gatherings - our gift shop where old ornaments can be purchased. 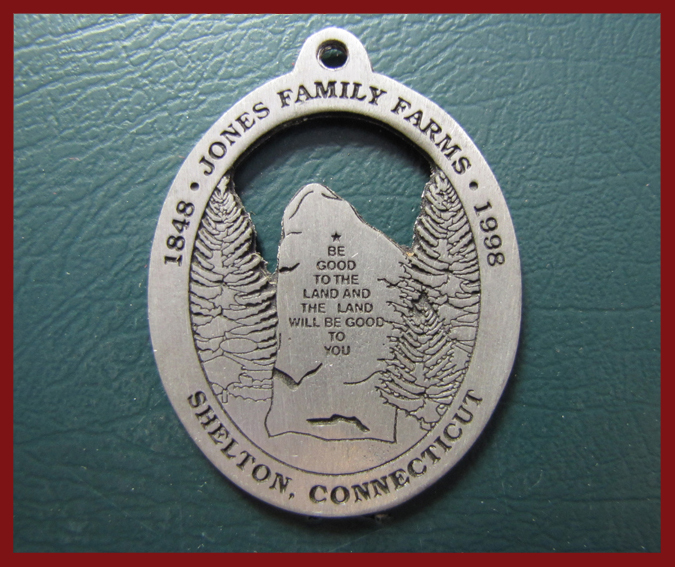 Credo Rock stands at Pumpkinseed Hill and states the Jones Family motto: "Be Good to the Land, and the Land Will be Good to You." 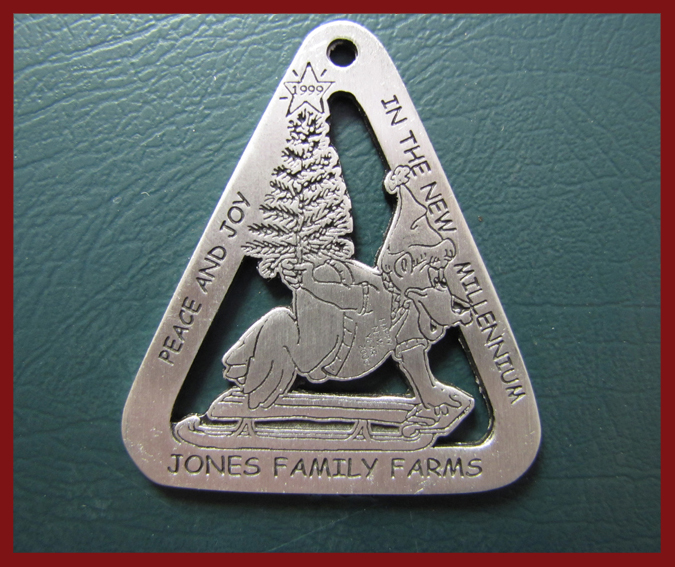 We geared up for a new millenium of peace and joy as a fun loving bear sledded on the snow bringing his Christmas tree with him. 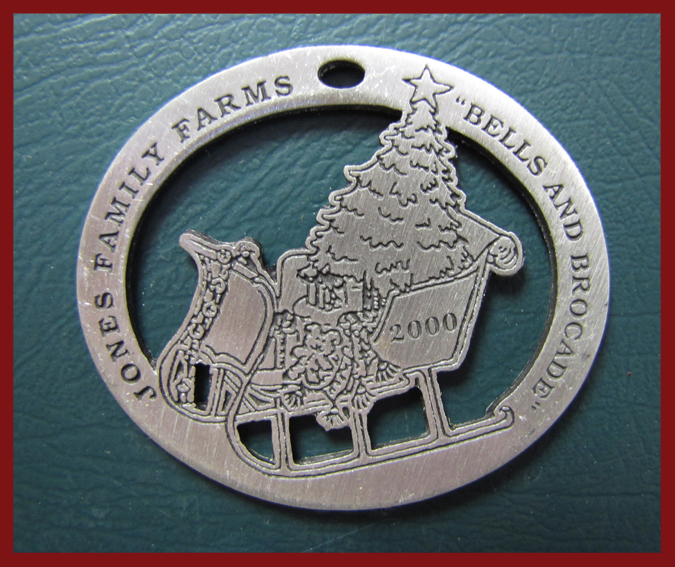 Bells and Brocades was the theme of the season in 2000. 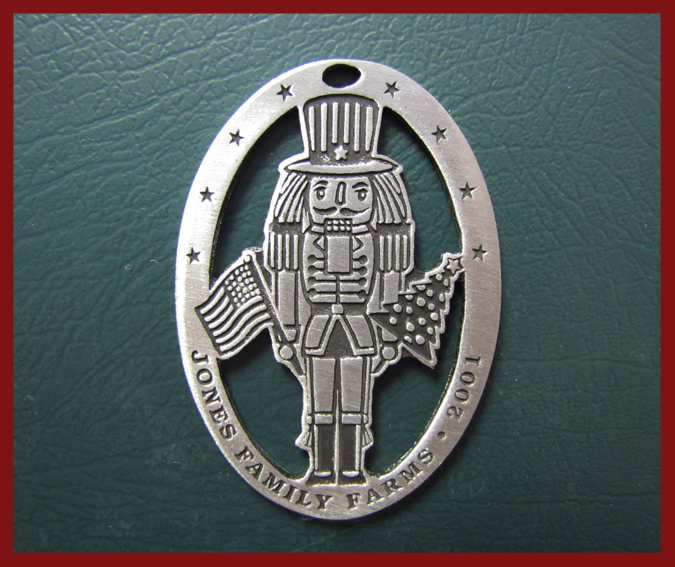 The Jones family joined the rest of the country and were very proud to offer a patriotic ornament in 2001. 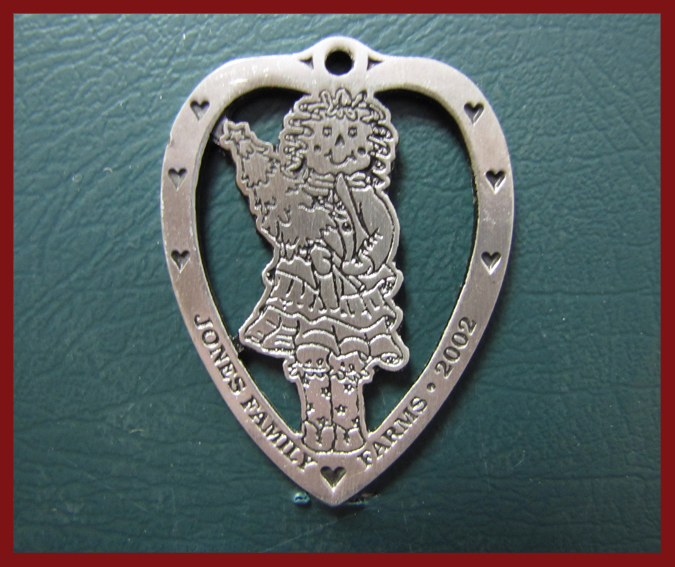 A return to childhood and innocence was captured with this rag doll. 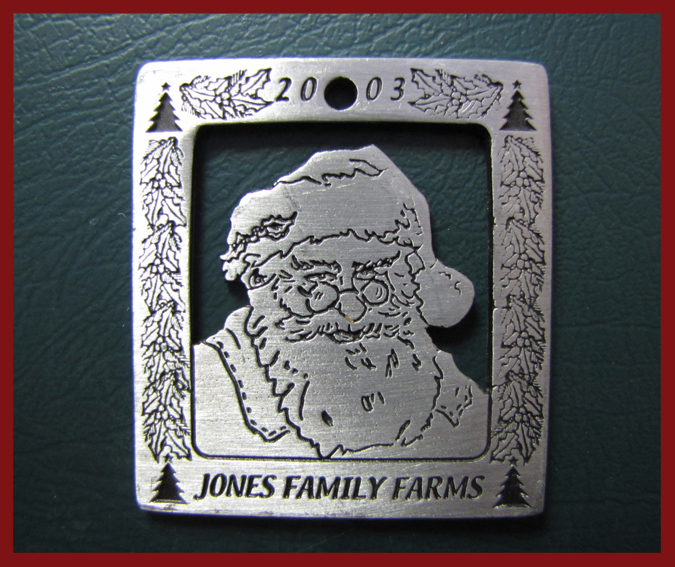 Every year Santa visits the farm and this ornament captured the featured of the farm's favorite jolly old elf. 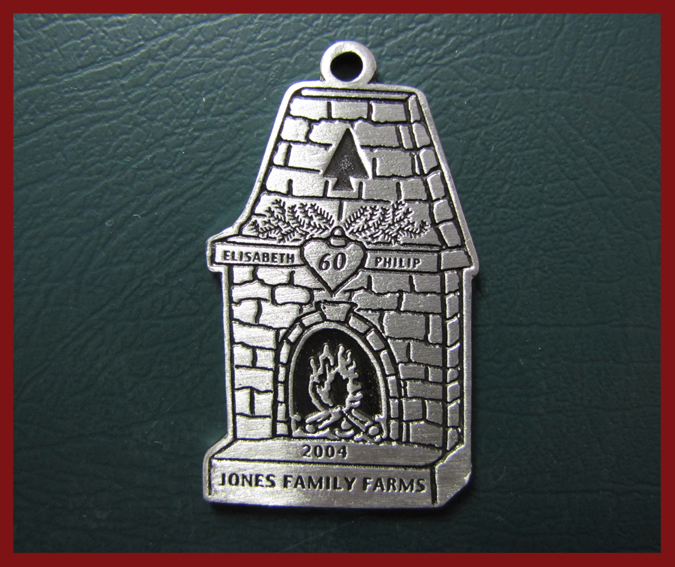 As you shop for wreathes and garland, notice the stone fireplace in the barn. This was in celebration of Philip and Elisabeth Jones' anniversary. As of 2013, the only ornament no longer in inventory. 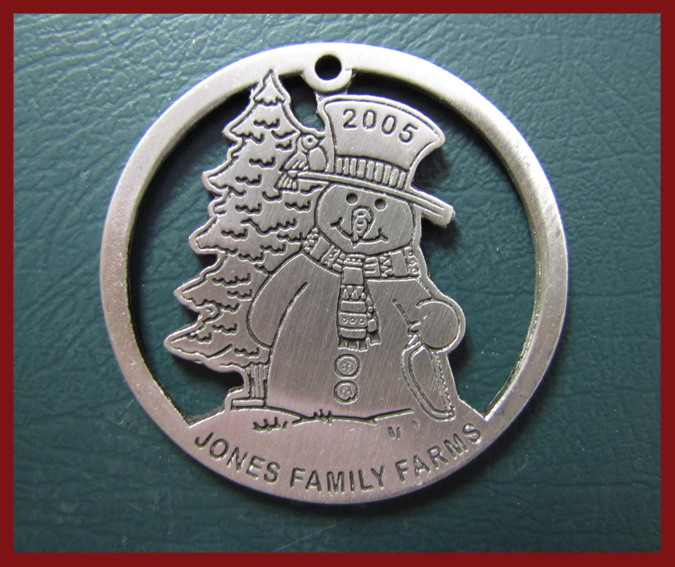 Like many of our guests, this friendly snowman brought his own saw for harvesting his tree. We love that. 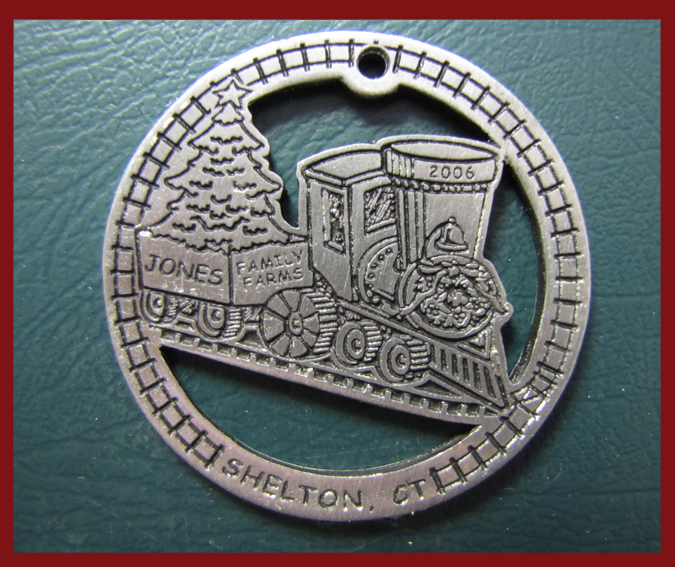 Trains have always been a big part of the themes at Jones. This year the ornament was easy to Choo Choo Choose. 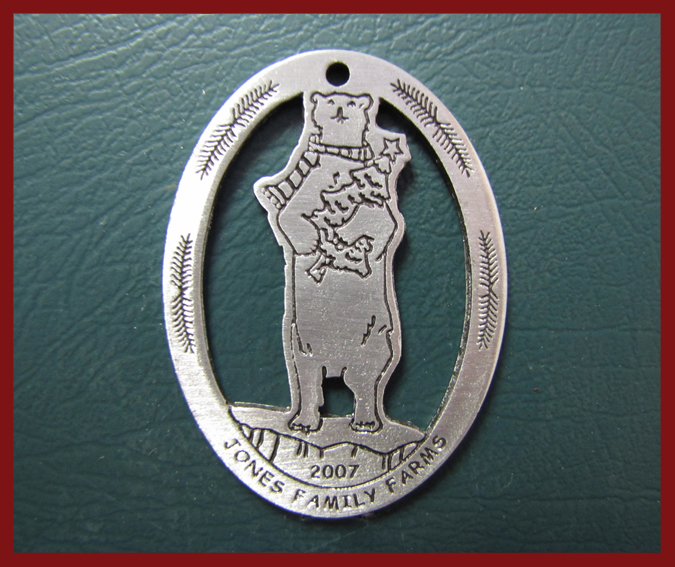 A polar bear stands tall, reminding us all about climate change and the need to stand tall together. 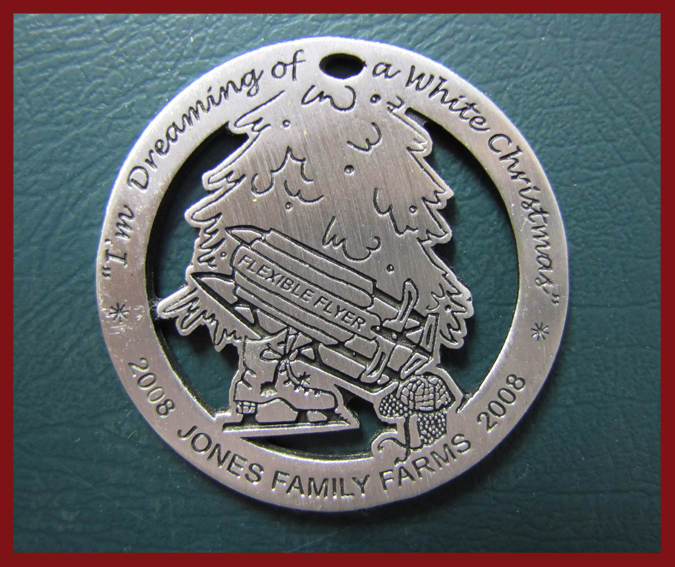 Jones celebrated the 1950s in 2008. This ornament included ice skates and a flexible flyer! 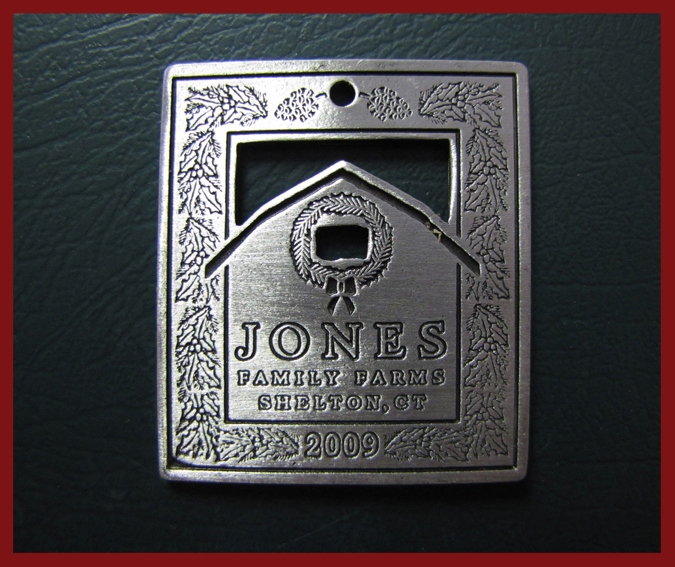 After years of various looks, the Jones Family Farms logo you're accustomed to now took shape. Gwyn Jones designed this barn logo - perfect for the new look. One of very few ornaments without a Christmas tree on it. 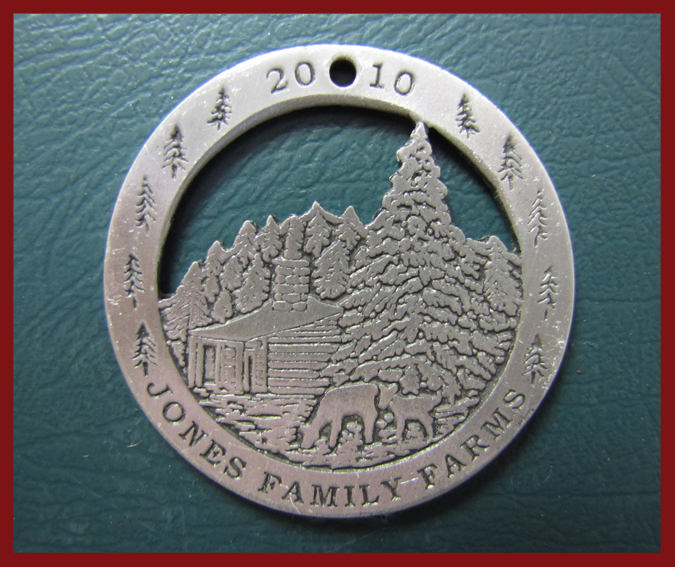 To celebrate Philip Jones and all he means to the farm, we brought back his original tree farm stationary logo. 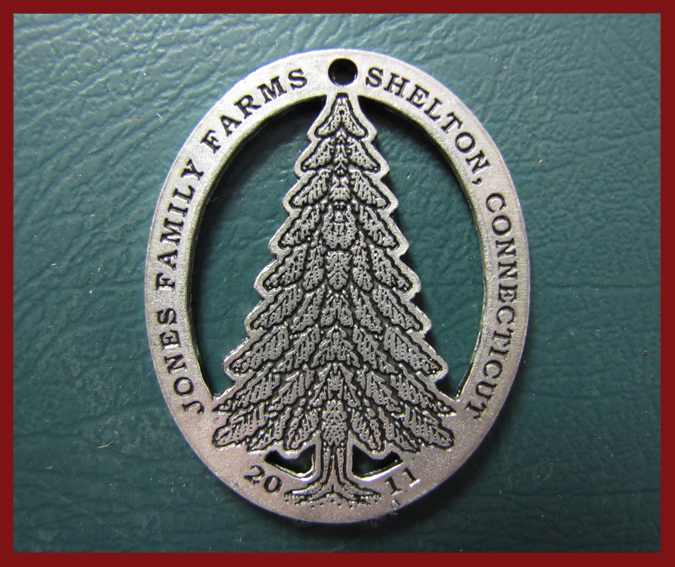 In 2011, the farm kept it simple - a single tree. Standing and waiting for the right family to find it and bring it home. 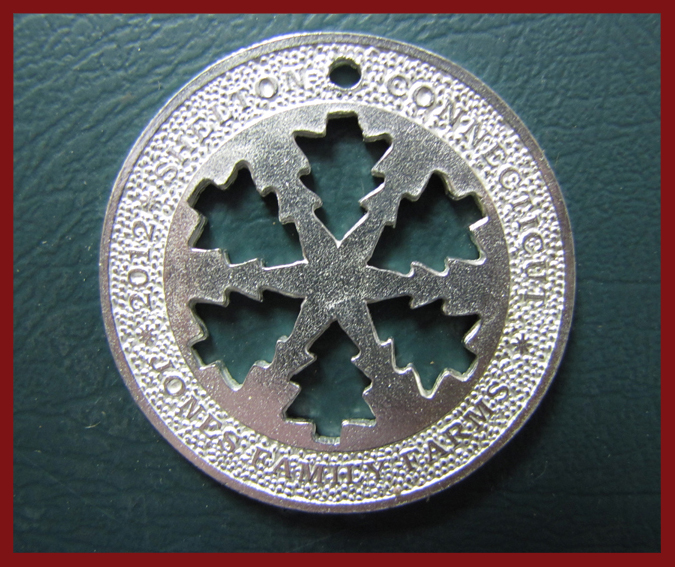 For the first time, we shined the pewter and the result was this stunning snowflake. Made of six points of Christmas trees - it's a fan favorite. 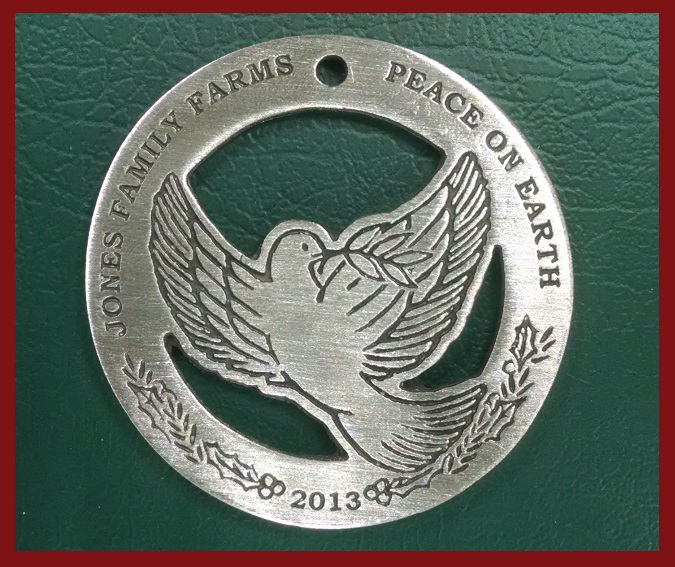 The dove symbolizes our hope that we can dedicate ourselves to a new world where children can be safe. This ornament is in memory of those who lost their lives at Sandy Hook Elementary School. 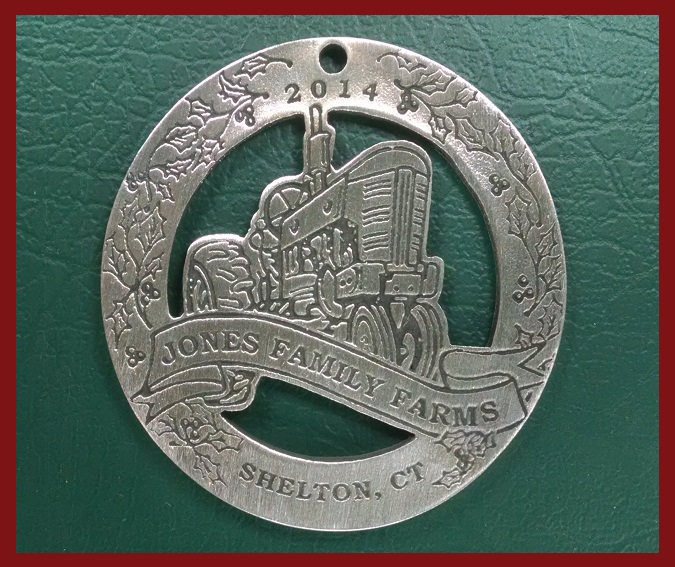 We selected the John Deere Model B tractor for our 2014 ornament to symbolize the hard work of man and machine that goes into bringing our crops to harvest, and the care we have for the equipment used in our fields. 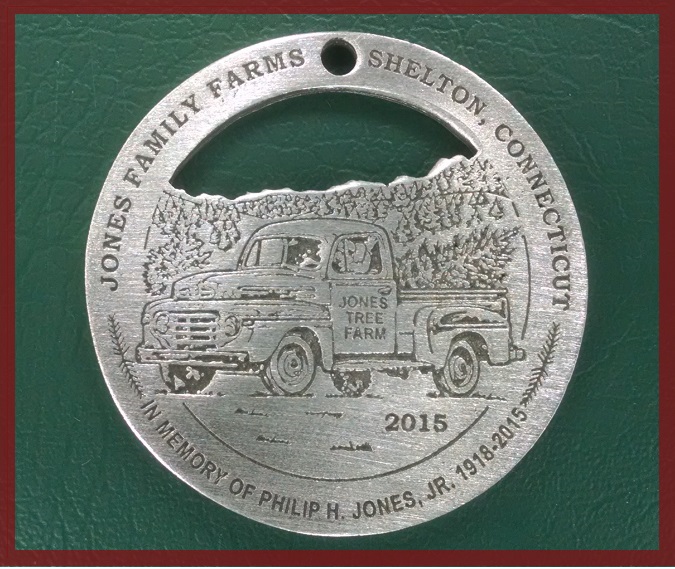 This ornament is a tribute to Philip H. Jones, Jr. He’s pictured, waving farewell, from his 1953 Pilothouse Dodge pick-up - the primary truck used here from 1953 to 1965. We’re grateful for all the happiness he brought. 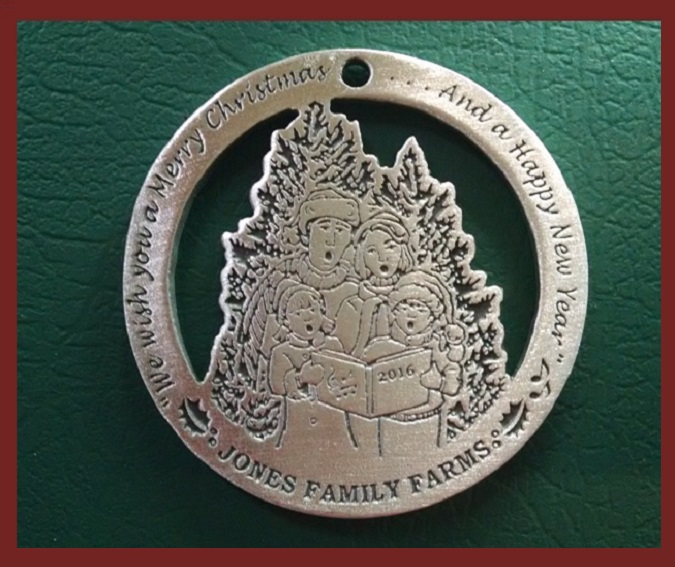 This ornament was a celebration of the joys of Christmas Caroling. As important as the Christmas tree is the music that surrounds this special season. No other holiday has so many celebration songs as does Christmas! 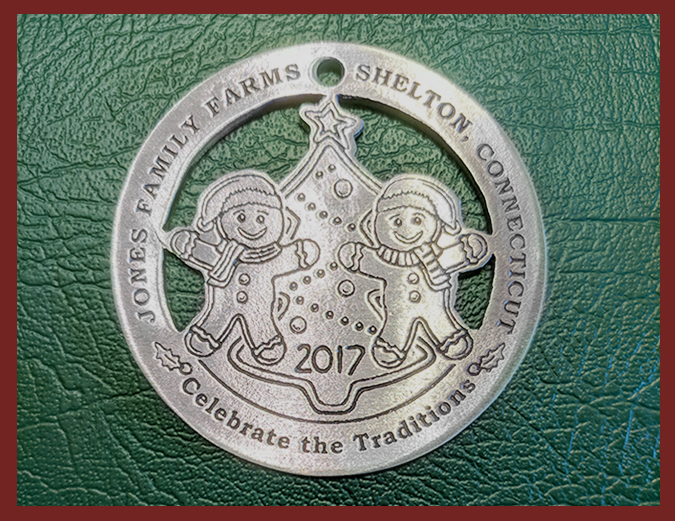 Originally, trees were the means by which presents were displayed Christmas morning. When goodies got too heavy, German glassblowers began producing the first glass ornaments. 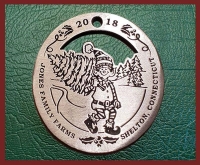 To commemorate our 25th year of releasing these dated, hand-crafted pewter ornaments, this ornament celebrates the tradition of Christmas Elves, as illustrated by this unique, 2-sided creation of a girl elf on one side, and a boy elf on the other - the first of its kind! 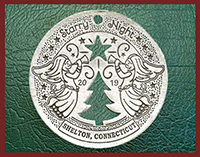 This year's ornament reflects on the meaning of Christmas through the symbols of stars and angels as told via the Christmas story and how wise men "followed yonder star" to a manger in Bethlehem. 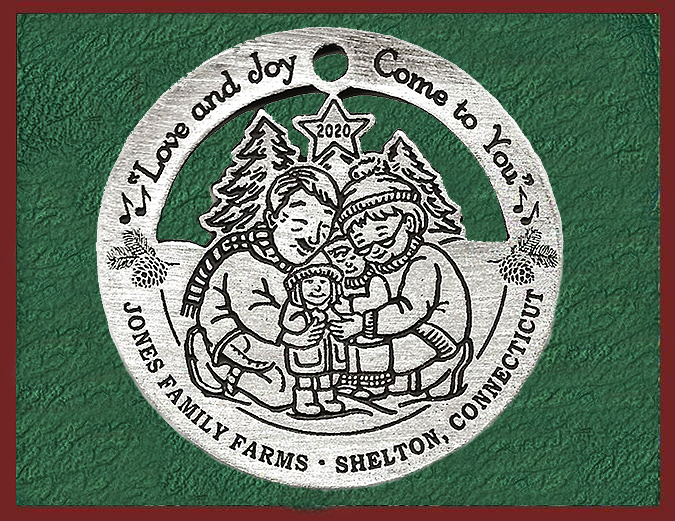 The 2020 ornament featured grandparents hugging their grandchildren. After the pandemic year, so many of us wanted to gather with extended family and give them a hug! 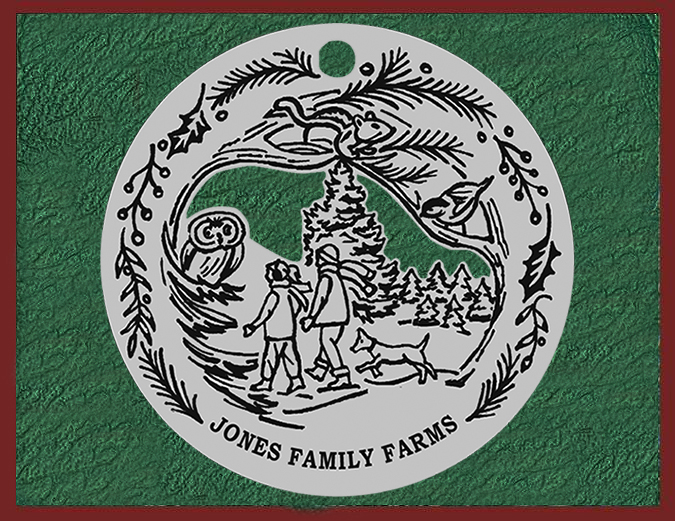 The 2021 ornament featured the wildlife that lives in the habitat provided by the farm and the tree fields. The side shown here show the farm in winter, with the owl, squirrel, and chickadee. The reverse side is a summer scene, with deer, fox and a cardinal.

Select the newsletter(s) to which you want to subscribe.

Be good to the land and the land will be good to you.